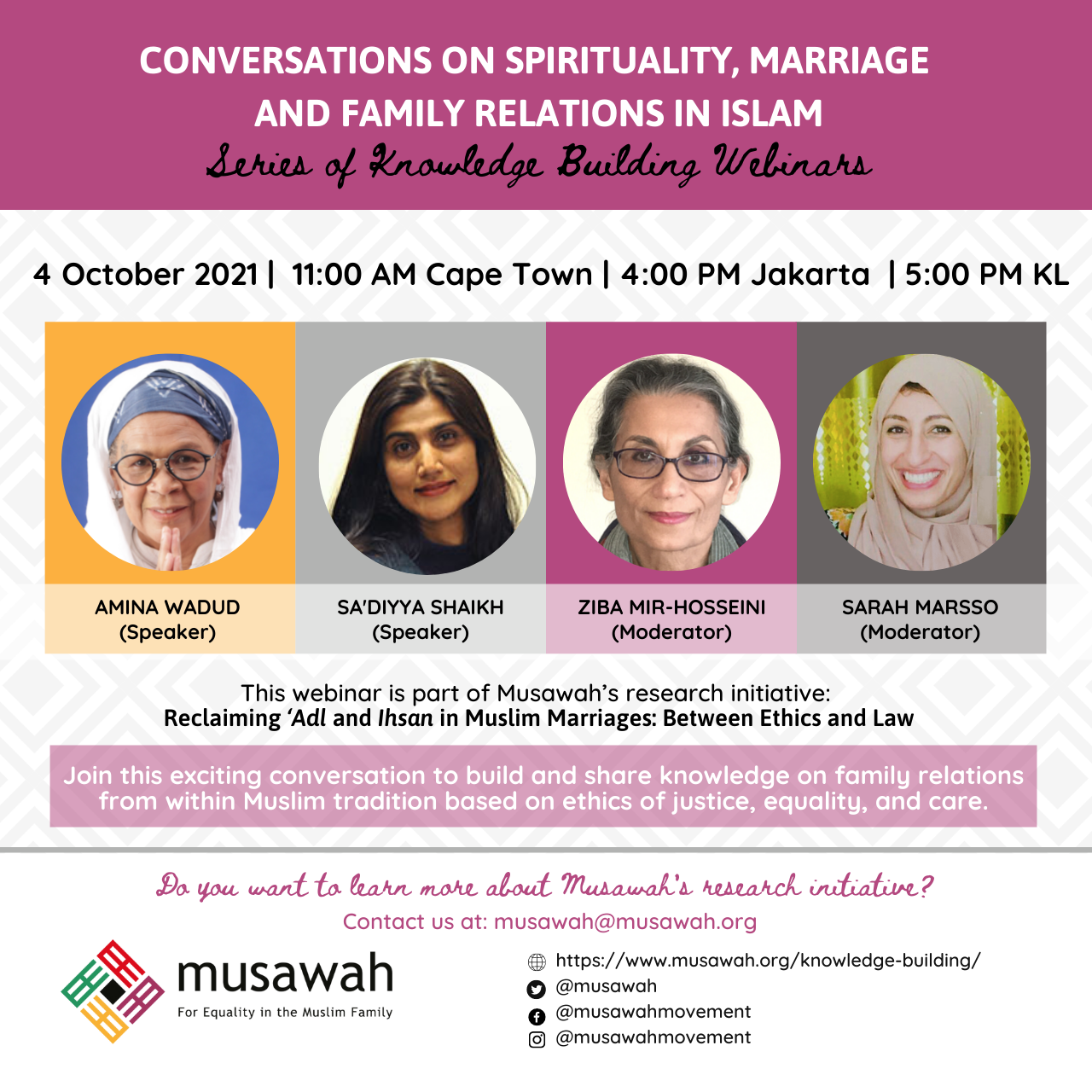 WEBINAR: Conversations on Spirituality, Marriage and Family Relations in Islam 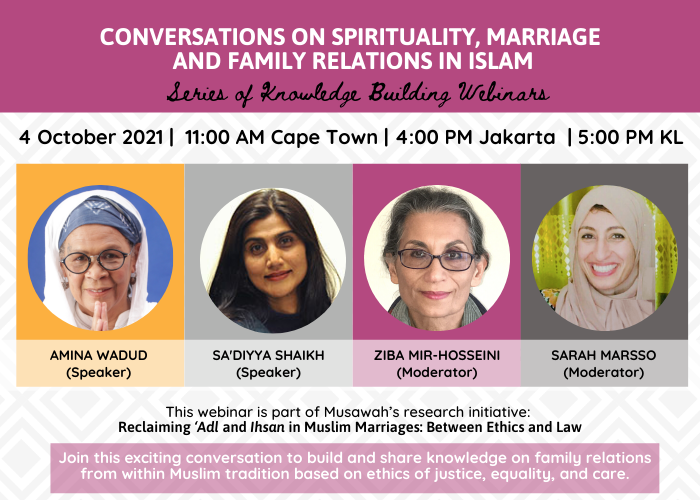 We invite you to join us in the last webinar of your series, titled “Conversations on Spirituality, Marriage and Family Relations in Islam”, featuring Dr. amina wadud and Dr. Sa’diyya Shaikh; moderated by Dr. Ziba Mir-Hosseini and Sarah Marsso.

How can we build more just, equal, and spiritually nourishing Muslim marriages and intimate relationships? How does the Qur’an guide us in shaping this relationship that helps us realize our better selves?

In this webinar, Dr. amina wadud and Dr. Sa’diyya Shaikh will reflect on issues of gender justice and family relations through spiritual lenses. Building on their scholarship and lived experiences, they will explore the intersections of spiritual growth, Qur’anic ethics, and egalitarian and mutually empowering family relations.

Dr. amina wadud is a world renown scholar and activist with a focus on Islam, justice, gender and sexuality. She is author of Qur’an and Woman: Rereading the Sacred Text from a Woman’s Perspective. Qur’an and Woman is a classic of Islamic feminist epistemology and methodology. Islamic feminism is the most dynamic aspect of Islamic reform today. Her second book: Inside the Gender Jihad: Women’s Reform in Islam captured the movement of progressive discourse to align more with an embodied ethics that combines scholarship and spirituality.  After a 3 year research project that investigated Islamic classical discourses on sexual diversity and human dignity, funded by the Arcus Foundation, she is organizing an online portal to confirm the significance of Queer Islamic Studies and Theology: (QIST) as part of the study of Islam and human well-being. Mother of five and Nana to six, she is best known as The Lady Imam.

Dr. Sa’diyya Shaikh is Associate Professor in the Department for the Study of Religions at the University of Cape Town. Her study of Islam began with an abiding interest in existential questions as well as a commitment to social justice – much of her work is animated by a curiosity about the relationship between the realms of spiritual and the political. Her book Sufi Narratives of Intimacy: Ibn Arabi, Gender and Sexuality (UNC Press, 2012) engaged with these formative concerns that still propel much of her work. Her areas of research include gender-sensitive readings of hadith, Quranic exegesis and Sufi texts; theoretical and political debates on Islam and feminism; religion and gender-based violence; contemporary Muslim women’s embodied, experiential and everyday modes of understanding Quranic teachings (“Tafsir of Praxis”). Together with Dr Fatima Seedat, she has a co-edited book (forthcoming in Spring 2022) with Yale University Press entitled The Women’s Khutbah Book: Contemporary Sermons on Spirituality and Justice from around the World; and has a recent chapter entitled “Refining Islamic Feminisms: Gender, Subjectivity and the Divine Feminine” In Surfacing: On Being Black and Feminist in Southern Africa eds. D. Lewis and G. Baderoon (Wits University Press, 2021). She is mother to Nuriyya, a feisty, opinionated 18 year old woman, and Ismael an impish entertaining 13 year old, and wife to Ashraf Kagee, academic, novelist and fun life partner.

Dr. Ziba Mir-Hosseini is a legal anthropologist specializing in Islamic law, gender and development. She has a BA in sociology (1974) from Tehran University (Iran) and a PhD in social anthropology (1980) from the University of Cambridge (United Kingdom). A professional research associate at the Centre for Middle Eastern and Islamic Law, University of London (United Kingdom), she has held numerous research fellowships and has been a visiting professor at the Hauser Global Law School, New York University (USA). She is a founding member of Musawah. Ziba’s publications include Marriage on Trial: A Study of Islamic Family Law in Iran and Morocco (1993, 2002); Islam and Gender: The Religious Debate in Contemporary Iran (1999); and Control and Sexuality: The Revival of Zina Laws in Muslim Contexts (with Vanja Hamzic, 2010). Dr. Mir-Hosseini is also a co-editor of Men in Charge? Rethinking Authority in Muslim Legal Tradition (2015) and Gender and Equality in Muslim Family Law: Justice and Ethics in the Islamic Legal Tradition (with Kari Vogt, Lena Larsen, and Christian Moe, 2013). She has also codirected, with Kim Longinotto, two award-winning feature-length documentary films on Iran: Divorce Iranian Style (1998) and Runaway (2001). In 2015, she received the American Academy of Religion’s Martin E. Marty Award for the Public Understanding of Religion.

Sarah Marsso: Since 2015, Sarah has been coordinating the activities of Musawah’s Knowledge Building Working Group. She co-authored Musawah’s Women’s Stories, Women’s Lives: Male Authority in Muslim Contexts (2016) and Who Provides? Who Cares? Changing Dynamics in Muslim Families (2018) and has contributed to many other Musawah publications. Sarah is a graduate of Sciences-Po (France) in European Studies and International Relations and holds an MA in Development and Cooperation in the Middle East & North Africa from l’Institut d’Etudes Politiques of Lyon (France). She is based in Paris, and has been involved in various workshops, activities, and events relating to feminist and anti-racist activism in France and Europe.