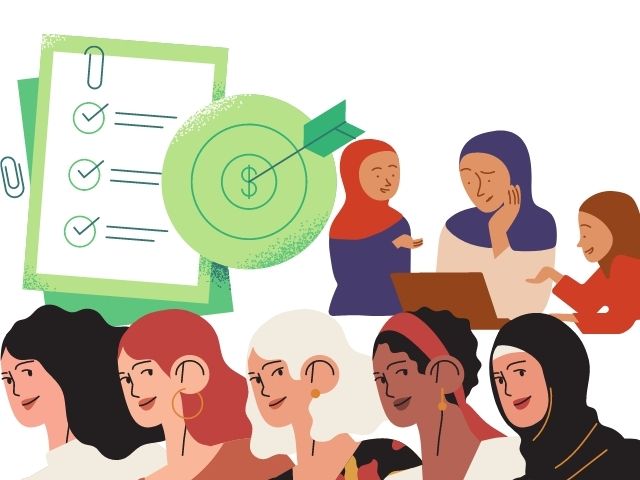 Busting 5 Myths Women Have About Financial Rights in Islam

Last month, I attended a webinar on Muslim women’s financial rights which was conducted by Musawah. As a Muslim woman who’s entered the workforce just two years ago, knowing more about my financial rights felt imperative. I am also an Indian expatriate living in the United Arab Emirates (UAE), which means I have to deal with a myriad of complexities surrounding personal family laws.

Consisting of founding members and activists, the panel explained how Muslim women’s access to money is greatly impeded by patriarchal interpretations of Islamic texts. The panel highlighted that many women are also unaware of their financial rights which adds to the problem. As the host of the panel Huda Jawad said, “there is no denial that both religion and economic capital are some of the favourite tools of patriarchy.”

This is perhaps one of the most pressing issues for Muslim women across the globe, even if they live in countries where they are free to earn for themselves.

At the centre of this myth lies the concept of qiwamah – a verse in the Qur’an which says that men are the protectors of women. Ziba Mir-Hosseini, an Iranian-born anthropologist and one of Musawah’s founding members, explained that marriage contracts often put women under the qiwamah of men:

“Classical jurists define a marriage contract as a contract of exchange that puts women under the qiwamah of men. Here qiwamah has an element of protection, and with protection always comes domination”.

With all this, it’s not hard to imagine that in many Muslim majority countries, women have had to take permission from their male guardians in order to go to work, run businesses, and even learn how to drive! Yes, as someone who lives in the UAE under the visa sponsorship of my father, I’ve had to get a ‘No Objection Certificate’ (NOC) from him, which I then submitted to the driving institute. The same had to be done when I first started working. These NOCs have more to do with the approval of the sponsor rather than a male family member. However, in most cases, the sponsor of a woman tends to be her father or her husband.

For many women like me, this is hardly an issue when the men in the family are supportive. But the point is that in many Muslim majority countries, women still need to seek official permission to do simple tasks like this.

However, the same countries are slowly changing these laws. For example, Saudi Arabia recently amended laws to end certain aspects of the male guardianship system.

2. “There is no concept of alimony in Islam!”

In several countries, the period of time post-divorce can differ, depending on what the court deems just. For instance, Tunisia took a huge leap in this regard. If a Tunisian court finds that a wife has suffered harm during her marriage, it will award maintenance and compensation upon the pronouncement of the divorce in the form of regular monthly payments that continue until the former wife’s remarriage, death, or when she no longer requires them. The amount awarded is based on the standard of living that the former wife was accustomed to during her marriage.

The Supreme Court of India in 2010 had upheld that a Muslim woman is entitled to maintenance from her former husband provided she doesn’t remarry. Interestingly, the court also held that the maintenance awarded to her cannot be restricted to the iddat period only.

In my culture, as would be true for many others, women are expected by default to run household tasks. Even though according to Islamic jurisprudence, a woman is not required to oversee all household chores, we find that in many family laws and social norms that they oblige women with this kind of work.

“What we know from research and reality is that the more women spend doing unpaid work inside the home, the less they’re able to have time to go out to work for paid salaries.”

Supporting this argument is the fact that the Arab world has the highest rate of unpaid work done by women, followed by the fact that it has the lowest employment rate for women.

However, countries like Afghanistan and Iran have enacted laws where a woman can demand wages for household chores from her husband while she is married to him.

4. “There is no regulation of matrimonial assets.”

For a long time, I believed that Islamically, men were only obliged to “share” their wealth with their wives in good faith and that women couldn’t assert legal rights over those properties. In fact, most Muslim family laws do not regulate shared matrimonial assets at all.

After attending the webinar and reading more on the topic, I found that countries like Brunei, Malaysia, Singapore and Indonesia, consider a wife’s unpaid work to be a contribution to her husband’s ability to acquire assets. So, the court may order that the assets be divided between them. In Turkey, laws allow an equal division of property acquired during the marriage.

Dr. Sharafeldin went on to explain that new bodies of religious knowledge that are gender egalitarian, are now being reflected into Muslim family laws:

Yet, we see that these laws are changing when there is political will. For example with regards to inheritance, many countries do not discriminate based on gender. Turkey is one such example. Even in Afghanistan and Kuwait, sons and daughters from the same mother inherit equally from her property.

Why do we have these myths? It is because for the most part, interpretations of Islamic texts have almost always been viewed through a patriarchal lens. In fact, countries have also changed and/or updated laws whenever it suited them politically – which shows that often, government inaction and patriarchy have been hand in glove with each other. It also shows that it has less to do with the Shari’ah and more to do with political will.

So is there a way out? For me, reading more on the interpretation of Islamic texts gave me an opportunity to explore how women could regain their financial rights. It also encouraged me to make others aware of it, by joining Musawah. What would be your inspiration?

Watch the recording of the CSW66 Parallel Event Webinar: ‘Who Gets the Money?!: Paths to Economic Rights and Gender Justice in Muslim Contexts’ here.