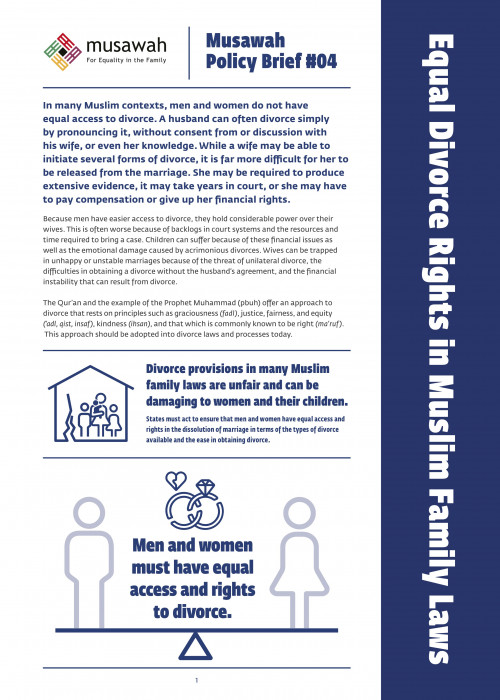 ‘Policy Brief 4: Equal Divorce Rights in Muslim Family Laws’ outlines how divorce provisions in many Muslim family laws are unfair and can be damaging to women and their children—but we can reform those laws.

In many Muslim contexts, men and women do not have equal access to divorce. A husband can often divorce simply by pronouncing it, without consent from or discussion with his wife, or even her knowledge. While a wife may be able to initiate several forms of divorce, it is far more difficult for her to be released from the marriage. Because men have easier access to divorce, they hold considerable power over their wives.

States must act to ensure that men and women have equal access and rights in the dissolution of marriage in terms of the types of divorce available and the ease in obtaining divorce. The Qur’an and the example of the Prophet Muhammad (pbuh) offer an approach to divorce that rests on principles such as graciousness (fadl), justice, fairness, and equity (‘adl, qist, insaf), kindness (ihsan), and that which is commonly known to be right (ma‘ruf). This approach should be adopted into divorce laws and processes today.

‘Policy Brief 1: Why Muslim Family Law Reform? Why Now?’ is available in ENGLISH and ARABIC.

‘Policy Brief 2: Ending Child Marriage in Muslim Family Laws’ is available in ENGLISH and in ARABIC.

‘Policy Brief 6: ​​Upholding the Best Interests of the Child in Custody and Guardianship’ is available in ENGLISH and ARABIC.

‘Policy Brief 7: Marriage as a Partnership of Equals’ is available in ENGLISH and ARABIC.