(Kuala Lumpur) 18 December 2019 – Forty years ago, on 18 December 1979, the Convention on the Elimination of All Forms of Discrimination against Women was adopted by the United Nations General Assembly. The Convention outlines “that discrimination against women violates the principles of equality of rights and respect for human dignity, is an obstacle to the participation of women, on equal terms with men, in the political, social, economic and cultural life of their countries, hampers the growth of the prosperity of society and the family and makes more difficult the full development of the potentialities of women in the service of their countries and of humanity,” among other guarantees to human rights.

“For many women’s groups that Musawah engages with, the CEDAW Convention is the most important international treaty used to hold their governments accountable to their obligations to advance the rights of women in their national contexts. For many, Geneva is one location where they actually finally get a chance to engage with their governments in critical ways. It is an important platform as activists get the space to meet directly with CEDAW Committee members, raise their key issues of concern, and are able to hold their governments accountable to their treaty obligations.

“For this, Musawah is grateful to the openness of the OHCHR, the CEDAW Secretariat and, not least, the CEDAW Committee members. These experts respect and welcome the knowledge and experience from the ground that civil society activists bring to their attention to enable them to undertake their responsibilities as treaty body members to advance the rights of women. For many activists who are denied the opportunity for frank and constructive discussions with their officials back home, the close confines of the meeting room in Palais des Nations is where their voices are heard, through the questions and issues raised by the CEDAW Committee members.

“It’s eight years now since Musawah decided to engage with the CEDAW reporting process. Since then, we have seen increasing numbers of CEDAW Committee members taking on States parties critically and constructively to challenge the ways Islam is used to justify continued discrimination against women and resist the demands for law reform. It is gratifying for us to see the CEDAW experts use Musawah reports and good practices tables to point out the new feminist scholarship and activism in the Muslim world and progress in law reform that governments can engage with and use as models to move forward to reform discriminatory family laws justified in the name of religion.

“I want to send my heartfelt congratulations to the CEDAW Committee members and the Secretariat staff, past and present, on reaching this milestone, even as we build towards the next 40 years of securing the human rights and fundamental freedoms of women everywhere.”

Today, of the nine core international human rights treaties, the most reserved convention remains CEDAW, and of the 440 reservations entered against CEDAW, over 60% are based on religion. CEDAW’s most reserved article is Article 16, which pertains to all matters relating to marriage and family relations, and many reservations from Muslim-majority countries invoke religion to erroneously excuse discriminatory laws as Shari’ah or God’s laws, and thus divine and unchangeable.

Musawah launched its international advocacy area of work in 2010 with a strategic decision to focus on engagement with the CEDAW process. The CEDAW Convention remains the most important human rights treaty for women’s groups in Muslim contexts because its three key principles—of substantive equality, non-discrimination and state obligation—enable activists to use the processes established to put pressure on their governments to reform laws and practices that discriminate against women. Since 2011, Musawah has engaged with on-the-ground activists, lawyers and women’s rights organisations to submit reports and interventions to the CEDAW Committee for its review sessions of State parties’ treaty obligations to ensure equality between women and men. Active engagement and rights-based knowledge sharing with the CEDAW Committee and States parties have yielded more specific and critical Concluding Observations that open up national opportunities for women’s rights activists to use as leverage to push their governments to reform discriminatory laws and practices. 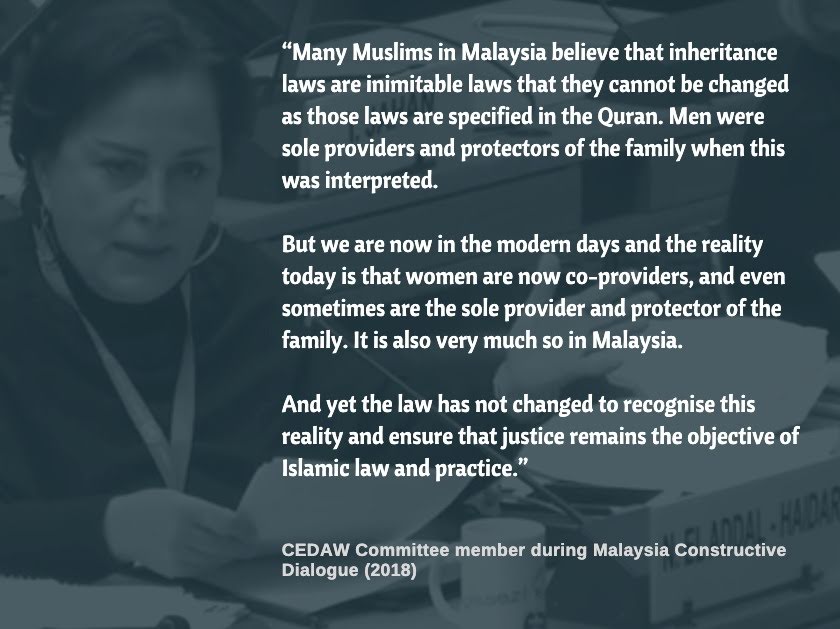 During the Malaysia Constructive Dialogue (2018), CEDAW Committee member raised the important point that lived realities of families is changing, while the Muslim family law remains discriminatory:

“Many Muslims in Malaysia believe that inheritance laws are inimitable laws, that they cannot be changed as those laws are specified in the Quran. Men were sole providers and protectors of the family when this was interpreted.

But we are now in the modern days, and the reality today is that women are now co-providers, and even sometimes are the sole provider and protector of the family. It is also very much so in Malaysia.

And yet the law has not changed to recognise this reality and ensure that justice remains the objective of Islamic law and practice.”

During the Kuwait Constructive Dialogue (2017), CEDAW Committee member shared positive legal developments from other Muslim countries that have reformed their family laws:

“Would the Government be willing to embark upon a revision of the personal law’s discriminatory provisions, taking into account the experiences and best practices of countries with similar legal systems and backgrounds.

Tunisia recently lifted the prohibition against marriage between Muslim women and non-Muslims and had long ago banned polygamy; Bahrain, after years of debate, had recently adopted a unified personal law. Would the Government encourage a similar public debate to bring about change in Kuwait?”

“Other countries have changed part of their Muslim family laws and exercise best practices in favor of women within their own territories.

It’s a matter of fiqh (jurisprudence) and written laws, which are human made and changeable.”

The commitment of the CEDAW Committee in raising key issues pertaining to discriminatory Muslim family laws and practices is also reflected in the nature of the Concluding Observations given to State parties. The CEDAW Committee has issued vital recommendations on the reform of discriminatory provisions, including on: equality between spouses, male guardianship, child marriage, forced marriage, polygamy, unequal right to divorce, inheritance, nationality, custody and guardianship rights, among other critical issues of concern.

In addition to engagement with the CEDAW Committee, States parties and civil society during country review sessions, Musawah also organised, with OHCHR and the Inter-Agency Task Force on Religion and Development, a seminar in 2018 on ‘Religion and Rights: Strengthening Common Ground’, during which Zainah said: “In making the case for change, Musawah regularly recommends that the CEDAW Committee urges States parties to recognize the ground-breaking progress made in scholarship, activism and law reform in the Muslim world. Governments cannot continue to hide behind the shield that these discriminatory laws are God’s laws, and therefore infallible and unchangeable. Or that they will not initiate change until the community is ready for change. The truth is there are voices within the community that are ready for change, that are in fact demanding change. But many States parties choose only to legitimise the voices of those men in authority, determined to preserve their power and privileges, while ignoring the women who are most affected by these discriminatory laws and practices on a daily basis.”