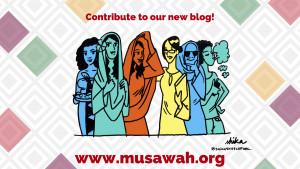 Welcome to the newly redesigned website for Musawah, and to our brand-new blog.

As the executive director of Musawah, I’m thrilled to launch this platform to showcase the work of our Advocates, activists, feminist scholars, and human rights defenders who make up the Musawah movement and embody the changes we want to see in the world.

In 2018 we saw some highs in historic reforms for Muslim women and men around the world:

But the lows have shown us the levels of injustice, cruelty, and violence that can be perpetrated in the name of Islam, especially against women. The arrests and detention of Saudi women human rights defenders—ongoing until now—for campaigning against the driving ban and the male guardianship system. Public humiliation and caning to teach LGBT women a “lesson”  in the state of Terengganu in Malaysia. Sudanese teenager Noura Hussein being sentenced to the death penalty for killing her husband, who had been trying to rape her after forcing her to marry while underage; even after international public outcry, she was still imprisoned.

Women have borne and continue to bear the brunt of discrimination and harmful practices justified in the name of religion in many parts of the Muslim world today. But it is in those very places that we see women’s resilience and ingenuity at work – to protest, to organise, to push for change in the ways we understand and practice our religion, striving towards the ideals of equality and justice.

Musawah, which means ‘equality’ in Arabic, was launched in February 2009 in Kuala Lumpur with over 250 participants from 47 countries, including 32 member countries of the OIC, Organisation of Islamic Cooperation. We came together because of what we knew in our hearts: that much of the unfair and discriminatory practices we faced justified as divine laws were in fact patriarchal, human-made interpretations. We knew that there could be another way. We could make another way, ourselves, together.

Over the past decade Musawah, our Advocates, and many more activists, scholars, and policy makers around the world have challenged patriarchal interpretations and understandings of our religion and how they are used as a source of law and practice to justify discriminations against women and to resist demands for law reform and compliance with international treaty obligations. Musawah’s groundbreaking work has brought new perspectives on Islamic teachings, inserting women’s voices and concerns into the production of religious knowledge and legal reform in Muslim contexts.

For many of us who have decided to engage with religion to fight for our rights, it is our utter faith in a just God and a just Islam that have made us embark on this perilous, but compelling public struggle. We push for an understanding of Islam that recognises the urgent necessity that we, as women, be treated as human beings of equal worth and dignity. It is as simple as that.

So read. Write. Speak truth to power. Because our lives don’t just give us the right or the authority, but also the responsibility, to be the voices of change in our communities. Every day we can choose the path of Islam that exalts the principles of equality, justice (‘adl), compassion (rahma), and dignity (karamah).