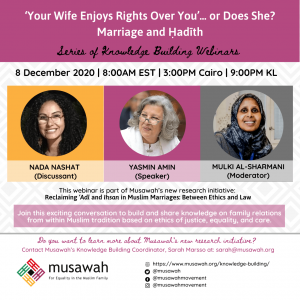 WEBINAR: ‘Your Wife Enjoys Rights Over You’… or Does She? Marriage and Ḥadīth. 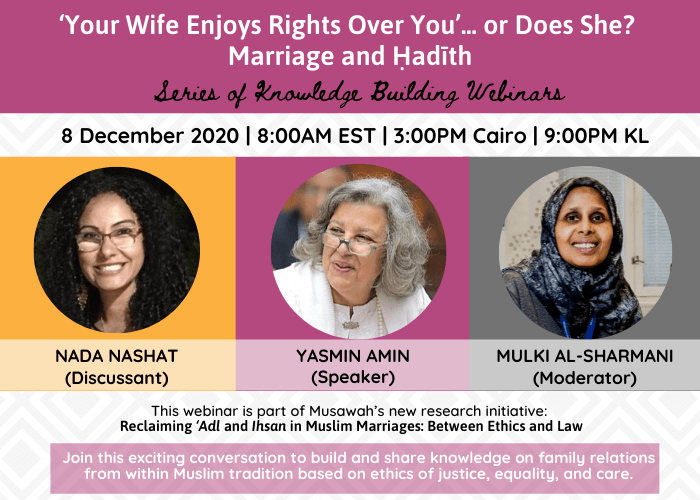 We are pleased to invite you to join us in this webinar titled “ ‘Your Wife Enjoys Rights Over You’… or Does She? Marriage and Ḥadīth,” featuring the work of Ms. Yasmin Amin (Exeter University) with the participation of discussant Nada Nashat (CEWLA) and moderated by Dr. Mulki Al-Sharmani (University of Helsinki/ Musawah).

What the Ḥadīth says about Muslim marriages in general and the Prophet’s marriages in particular? In this webinar, Yasmin Amin mines the Hadith corpus for a framework for egalitarian Muslim marriage, using a methodology grounded in the Islamic interpretive tradition. She will focus, in particular, on Prophet’s Muhammad’s marriages to shed light on practices and teachings that emphasize cooperative spousal roles in the marital home; affirm women’s needs and rights in intimate spousal relations; and welcome their presence and role in the public sphere. Yasmin Amin reflects on the lessons learned from this Prophetic model of marital relations for present day Muslim efforts to reform juristic rulings and codified family laws that sanction gender hierarchy and women’s subjugation in marriage.

‘Your Wife Enjoys Rights Over You’...
or Does She? Marriage and Ḥadīth.

Ms. Yasmin Amin is an Egyptian-German mature student currently finalizing a phd in Islamic studies at Exeter University’s Arab & Islamic Institute researching “Humour and Laughter in the Ḥadīth”. She obtained a post graduate diploma in Islamic Studies in 2006 and an MA in Islamic Studies from the American University in Cairo in 2010. Her research covers various aspects of gender issues, early Muslim society and culture as well as the original texts of Islamic history, law and ḥadīth. She is the author of the forthcoming ‘Musnad Umm Salama and the factors affecting its evolution’, co-translator of ‘The Sorrowful Muslim’s Guide,’ and co-editor of ‘Islamic Interpretive Tradition and Gender Justice: Processes of Canonization, Subversion and Change.’

Discussant: Ms. Nada Nashat is currently the Advocacy Coordinator at the Center for Egyptian Women’s Legal Assistance (CEWLA) based in Cairo, Egypt. She was an International Advisory Group (IAG) member of Musawah in 2016/2017. She has participated in different international events related to human rights and women’s rights such as CSWs, discussions on post 2015, FfD conference, African regional meetings on BPFA and CSW, and UPR. She is also responsible for conducting different campaigns to promote women and human rights. Nada has lectured students in different universities on women’s rights situation in Egypt at Harvard, State University of New York (SUNY), Columbia, Northeastern University, and the American University in Cairo (AUC). Nada graduated in 2011 with bachelors’ degree in physics and in 2020 with a Bachelors’ in Law.