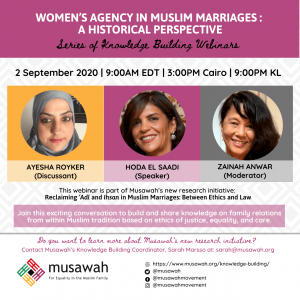 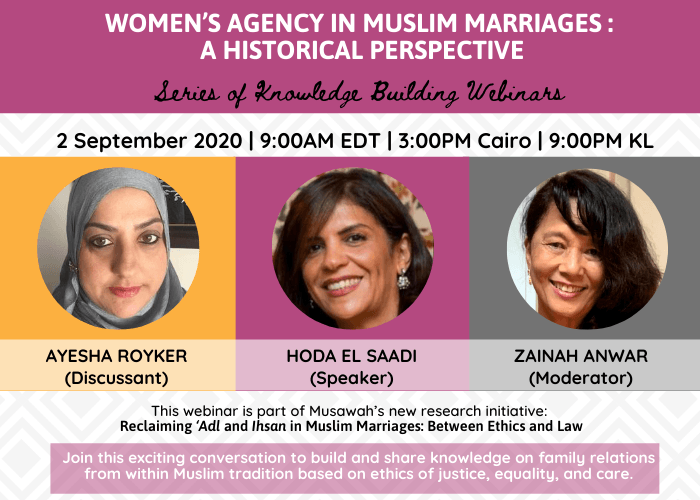 We are pleased to invite you to join us in this webinar titled “Women’s Agency in Muslim Marriages: A Historical Perspective,” featuring the work of Dr. Hoda El Saadi (American University in Cairo) with the participation of discussant Ms. Ayesha Royker (MPL Network in South Africa) and moderated by Ms. Zainah Anwar (Musawah).

What can we learn from historical practices of Muslim marriage? In this webinar, Dr. El Saadi examines marriage practices in pre-modern Muslim Egypt, focusing on the 8th to the 18th century. Dr. El Saadi undertakes a gender-sensitive reading of various historical sources, and explores these sources as social and cultural discourses on marriage norms and practices. Her presentation will shed light on the plurality, flexibility, and responsiveness of Islamic law; the social construction of those aspects of marriage that are seen as ‘Islamic’ and claimed to be ‘divine’ and ‘immutable’; the interplay between historical, legal, sociological, and economic factors that impacted Muslim marital norms and practices; and the different ways through which women reclaimed their voices and agency in marriage.

Speaker: Dr. Hoda El Saadi is an adjunct faculty member in the Department of Arab and Islamic Civilization at the American University in Cairo (AUC) and a co-founder of the Woman and Memory Forum. She received both her BA and MA from the American University in Cairo and her PhD from Cairo University in Islamic History.  Her field of specialization is early and medieval Islamic history. She has been teaching a number of courses on History of the Arab World and history of Egypt. She developed an interest in gender issues in the Islamic tradition. She is specifically interested in the roles and positions of women in Arab/Islamic history, from pre-modern to modern, to highlight and analyze women’s presence in public life before the pre-modern period, exploring their changeable roles through the ages. Her aim is to use history (and its interpretations) to strengthen the position of Muslim women in the present, as well as formulate a culturally Islamic discourse that incorporates women’s perspective and an awareness of gender. She considers her work to be a form of resistance against the process of exclusion and marginalization from which women suffered in various historical periods.  One early published book in Arabic is;  El Saadi, Hoda & Amina el Bindari. Al_Awqaf fi Suwar wa Sutur. Cairo; Women and Memory, 2006. Some of Hoda’s recent publications also include: “Islamic Feminism in Egypt: Between Acceptance and Rejection,” in Arab Feminism: Gender Equality in The Middle East, edited by Jean Maqdisi, Rafif Sidawy and Noha Bayoumi (IB Tauris, 2014), and Questions and Answers about Gender and Feminism, co-authored with Aya Sami [Cards]. Cairo: Women and Memory Forum, 2016.

Discussant:  Ms. Ayesha Royker is a single mother of 3 sons. She is a qualified paralegal who is currently studying towards her LLB degree while completing her articles of clerkship at a small legal firm in Cape Town.  Ayesha is an activist, a member of the MPL Network (South Africa) as well as a board member of the NPO Positively Muslim. Her passion lies in the education and empowerment of women and youth in her community.  Ayesha’s personal struggle for her rights has made her passionate towards women’s rights and she is fast becoming a voice for Muslim women in South Africa who may have found themselves in the same or similar circumstances she has.  She has been involved in various workshops and presented at events relating to the effects of the non-recognition and non-regulation of Muslim marriages in South Africa, most notably presentations at workshops to the statutory Commission for the Promotion and Protection of the Rights of Cultural, Religious and Linguistic Communities (the CRL Commission).  Ayesha aspires to contribute to change in her community by speaking out against systemic injustices against women and children.

Moderator: Ms. Zainah Anwar is a founding member and former Executive Director of Sisters in Islam (SIS), a non-governmental organisation working on the rights of Muslim women within the framework of Islam. She is now the Executive Director of Musawah, the SIS-initiated Global Movement for Equality and Justice in the Muslim Family. She also writes a monthly column, ‘Sharing the Nation’, for The Star, the largest English-language daily in Malaysia. Her other work experience includes: Chief Programme Officer, Political Affairs Division, Commonwealth Secretariat, London; Freelance Writer; Senior Analyst, Institute of Strategic and International Studies, Kuala Lumpur; Political and Diplomatic Writer, The New Straits Times, Kuala Lumpur. She was also a member of the Human Rights Commission of Malaysia from 2000–2004. Her book, Islamic Revivalism in Malaysia: Dakwah Among the Students (1987), has become a standard reference in the study of Islam In Malaysia. She was educated at the Fletcher School of Law and Diplomacy at Tufts University, Boston University and the MARA Institute of Technology, Malaysia, in the fields of international relations and journalism.