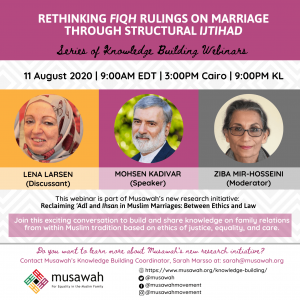 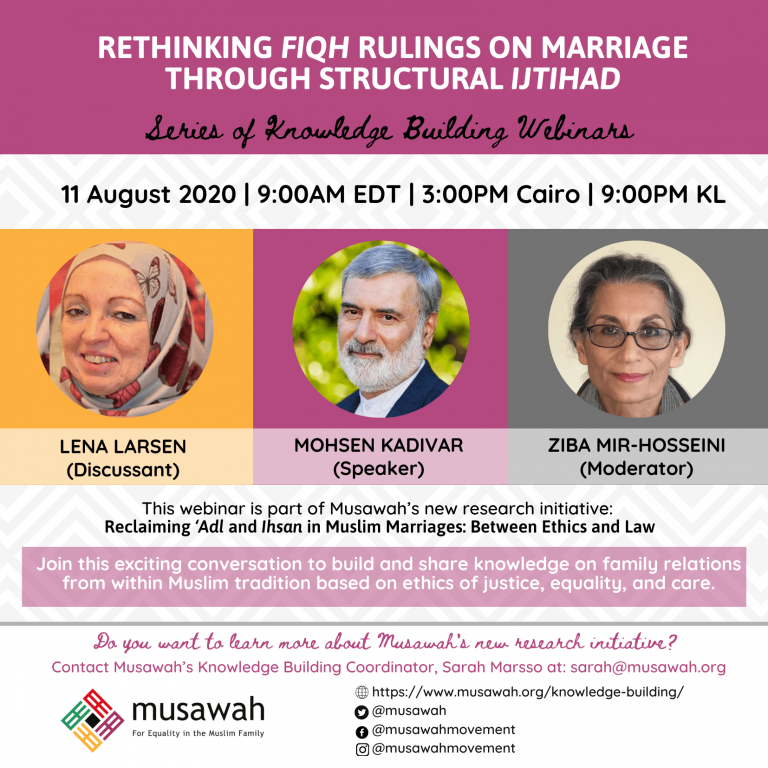 We are pleased to invite you to join us in this webinar titled “Rethinking Fiqh Rulings on Marriage through Structural Ijtihad”, featuring the work of Dr. Mohsen Kadivar (Duke University) with the participation of discussant Dr. Lena Larsen (NCHR, University of Oslo) and moderated by Dr. Ziba Mir-Hosseini (Musawah/SOAS University of London).

How do we critically engage with the foundations of usul al-fiqh in the process of revisiting Muslim marriage? In this webinar, Dr. Kadivar revisits the theoretical and philosophical foundations that underpin classical fiqh rulings on marriage. He contends that reason, the Qur’an, and the authentic Sunnah require that women be treated with justice and according to ma‘ruf (that which is commonly known to be right). He proposes a reformist approach to contemporary Muslim marriages and family relations, using what he calls ‘structural ijtihad’. With this new methodology, he holds that all juristic arguments on marriage should be tested against the following four criteria: rationality, justice, ethics, and effectiveness, all according to the mentality and standards of the time.

Speaker: Dr. Mohsen Kadivar is a leading public intellectual and a theologian trained in Islamic seminaries in Iran, having earned the certificate of Ijtihad in Qom and received a Ph.D. of Islamic Philosophy and theology from Tarbiat Modarres University in Tehran, Iran. His criticism of the Iranian regime led to his imprisonment (1999-2000), the banning of his publications, and finally to his exile from Iran in 2008. He has been a research professor of Islamic Studies at Duke University (Durham, NC, US) since 2009. He was a visiting professor at Harvard Law School, University of Virginia, and University of North Carolina; a global ethics fellow with the Carnegie Council, research fellow with Wissenschaftskolleg (Institute for Advanced Study) in Berlin, Germany, and a fellow of National Humanities Center in Research Triangle Park, North Carolina. His interests span both classical and modern Islamic thought with a special focus on Islamic philosophy and ethics, Shiʿi theology and jurisprudence, Qurʾanic studies, Shiʿi political thought, and Islam and human rights. Author of dozens of books in Persian and Arabic, his forthcoming books in 2020-21 are Human Rights and Reformist Islam and Blasphemy and Apostasy in Islam: Debates in Shi’a Jurisprudence (both Edinburgh University Press), and Islamic Theocracy in the Secular Age: Revisiting Shi’ite Political Theology & Ideology of Islamic Republic of Iran, Islamic Civilization and Muslim Networks Series.

Discussant: Dr. Lena Larsen  is an historian of religion and she is the director of the Oslo Coalition on Freedom of Religion or Belief at the Norwegian Centre for Human Rights, University of Oslo (since 1999). She obtained her PhD in 2011 with a thesis published as How Muftis Think: Islamic Legal Thought and Muslim Women in Western Europe (Brill, 2018). She has co-chaired the Oslo Coalition project New Directions in Islamic Thought since 2003, and she is co-editor of its previous publications New Directions in Islamic Thought and Practice (2009) and Gender and Equality in Muslim Family Law (2013), as well as Freedom of Expression in Islam: Challenging Blasphemy and Apostasy Laws (forthcoming 2020). Other publications include Facilitating Freedom of Religion or Belief: A Deskbook (2004) and a chapter on economy and gender roles in marriage in Mir-Hosseini et al., Men in Charge? Rethinking Authority in Muslim Legal Tradition (2015). She is a member of the advisory committee at the Faculty of Theology, University of Oslo, for a continuing education program for religious leaders with a foreign background. She was awarded a Science and Arts Medal by Egypt in 2008.

Moderator: Dr. Ziba Mir-Hosseini is a legal anthropologist specialising in Islamic law, gender and development. She has a BA in sociology (1974) from Tehran University, Iran, and a PhD in social anthropology (1980) from the University of Cambridge, United Kingdom. A professional research associate at the Centre for Middle Eastern and Islamic Law, University of London, United Kingdom, she has held numerous research fellowships and is visiting professor at the Hauser Global Law School, New York University.  She is a founding member of Musawah. Ziba’s publications include Marriage on Trial: A Study of Islamic Family Law in Iran and Morocco (1993, 2002); Islam and Gender: The Religious Debate in Contemporary Iran (1999); and Control and Sexuality: The Revival of Zina Laws in Muslim Contexts (with Vanja Hamzic, 2010). Dr. Mir-Hosseini is also a co-editor of Men in Charge? Rethinking Authority in Muslim Legal Tradition (with Mulki Al-Sharmani and Jana Rumminger, 2015) and Gender and Equality in Muslim Family Law: Justice and Ethics in the Islamic Legal Tradition (with Kari Vogt, Lena Larsen and Christian Moe, 2013). She has also codirected, with Kim Longinotto, two award-winning feature-length documentary films on Iran: Divorce Iranian Style (1998) and Runaway (2001). In 2015 she received the American Academy of Religion’s Martin E. Marty Award for the Public Understanding of Religion.