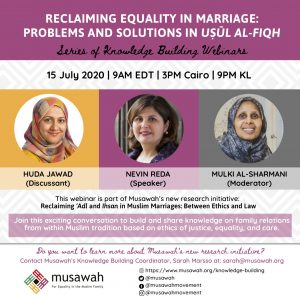 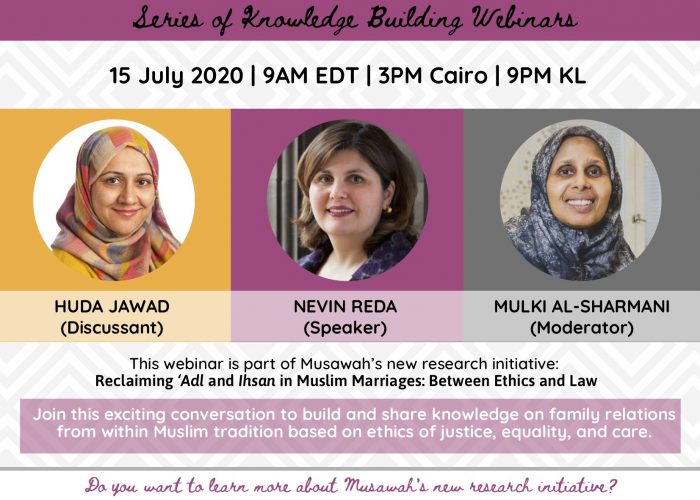 We are pleased to invite you to join us in this webinar titled “Reclaiming Equality in Marriage: Problems and Solutions in Usul al-Fiqh,” featuring the work of Dr. Nevin Reda (University of Toronto) with the participation of discussant Huda Jawad (Co-founder of Faith & VAWG Coalition and Co-chair of End Violence Against Women) and moderated by Mulki Al-Sharmani (Musawah/University of Helsinki).

How can one construct an egalitarian jurisprudence (fiqh) of Muslim marriage that is authentic to the tradition and functional in the contemporary context? In this webinar, Dr. Nevin Reda explores this question and proposes a new, Islamic feminist methodology (manhaj niswī rawḥānī) that connects jurisprudence to ethics and the higher spiritual values that they serve. This approach argues for a new conceptualisation of marriage as a civil, legally binding contract of equal partnership that manifests the ethical imperatives of the Qur’an (e.g.ʿadl, iḥsān) and allows for the pursuit of legal rights as described in the Qur’an (e.g. divorce, alimony). This conceptualisation of marriage contrasts with the current trend to sanctify classical constructs of marriage that are not conducive to justice and do not protect women.

Dr. Reda will identify and discuss key methodological gaps in the science of uṣūl al-fiqh that have contributed to the development and perpetuation of norms and rulings that discriminate against women in Muslim marriages. She will discuss how her new methodology addresses some of these gaps and opens the way for building marriage as a partnership of equals.

Dr. Nevin Reda is Associate Professor of Muslim Studies at Emmanuel College of Victoria University, in the University of Toronto. Her research interests include the poetics and hermeneutics of Qur‘anic narrative structure, Hebrew Bible and Qur‘an, spiritually integrative approaches to the Qurʾan, Islamic feminist hermeneutics, Islamic ethical-legal theory (uṣūl al-fiqh), and Islamic political theory. She has published one monograph, The al-Baqara Crescendo: Understanding the Qurʾan’s Style, Narrative Structure, and Running Themes. An edited volume is scheduled for release in the summer of 2020, titled Islamic Interpretive Tradition and Gender Justice: Processes of Canonization, Subversion, and Change (co-edited with Yasmin Amin). She has also published several articles, the most recent of which is “The Qur‘an and Domestic Violence: An Islamic Feminist, Spiritually Integrative Reading of Verse 4:34.” At Emmanuel, Dr. Reda teaches a variety of courses in core Islamic disciplines, including the Qur‘an, the Prophet Muhammad’s biography, Sharia, Islamic spirituality, and classical and modern Islamic thought.

Discussant: Ms. Huda Jawad has a combined Honours Degree in Sociology and Psychology from Roehampton University and a Masters in International Studies and Diplomacy from the School of Oriental and African Studies (SOAS), University of London. She also holds a PTTLS Level 4 Certificate and is a qualified National Women’s Aid trainer in Domestic Abuse and Sexual Violence. Huda has held various positions in local government, national and international NGOs and charities tackling a range of issues including social exclusion, justice, and equality. In 2011, she coordinated a research project that tracked the lives of 100 women who had left their abusive partners, for three years. She set up the Safety Across Faith and Ethnic Communities, where she works with and supports faith and BME communities to improve the response to domestic abuse and gender-based violence. Huda is also a 2017 Clore Social Fellow, she co-founded Faith & VAWG Coalition and is a Co-Chair of End Violence Against Women Coalition, a leading coalition of specialist women’s support services, researchers, activists, survivors and NGOs working to end violence against women and girls in all its forms in the UK.

Moderator: Dr. Mulki Al-Sharmani is Associate Professor of Islamic and Middle Eastern Studies, University of Helsinki. Mulki is also a member of the Musawah Knowledge Building Working Group and coordinated the Global Life Stories Project. She is also the author of Gender Justice and Legal Reform in Egypt: Negotiating Muslim Family Law, 2017 (the American University in Cairo); co-editor (with Ziba Mir-Hosseini and Jana Rumminger) of Men in Charge? Rethinking Authority in Muslim Legal Tradition, 2015 (OneWorld); and co-editor (with Marja Tiliikainen and Sanna Mustasaari) of Wellbeing of Transnational Muslim Families: Marriage, Law, and Gender (Routledge, 2019).