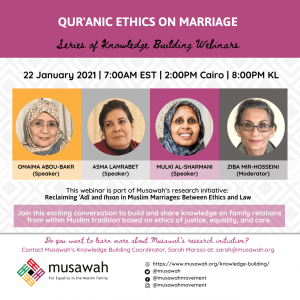 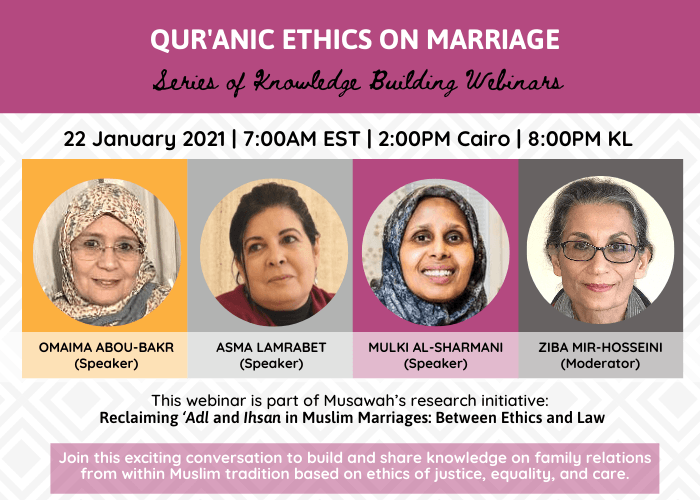 We are pleased to invite you to join us in this webinar titled “Qur’anic Ethics on Marriage”, featuring the work of Asma Lamrabet (Independent researcher), Omaima Abou-Bakr (Cairo University) and Mulki Al-Sharmani (University of Helsinki), moderated by Ziba Mir-Hosseini (Musawah).

What are the Qur’an’s teachings on marriage – both as an intimate human relationship and as the most basic social institution? How can we approach the verses on marriage from within the Qur’an’s ethical worldview?  What are the implications of an ethically-oriented reading of the Qur’an for Muslim gender norms and rights?

In this webinar, Asma, Omaima, and Mulki will explore these questions. They propose a new methodology for reading the Qur’anic verses on marriage and its different aspects, shedding light on the neglected link between Qur’anic ethics and Islamic legal tradition.  They will also reflect on the importance of Muslim women engaging with the Qur’an and contributing to the science of tafsir.

Dr. Asma Lamrabet is a hematologist at the Avicena Public Hospital in Rabat. She was the Director of the Center for Women’s Studies in Islam in the Rabita Mohammadia des Oulémas du Maroc from 2011 to March 2018. She has studied women’s issues in Islam for many years and has delivered lectures on this topic at various conferences around the world. From 2004 to 2007, she was the coordinator of a research and reflection group on Muslim women and intercultural dialogue in Rabat. She is also the founding member of the Fatéma Mernissi Chair at Mohammed V University in Rabat since 2017 and a member of the Moroccan National Committee on Education and Culture since 2015. She is currently the Gender Studies Chair in the Euro-Arab Foundation for Higher Studies in Granada, Spain, and a member of the scientific committee of the Moroccan Driss Benzekri National Institute for Human Rights. She is the author of several books; Women and Men in the Qur’an, published by Palgrave Macmillan, received the Social Sciences Awards 2013 by the Arab Woman Organization.

Dr. Omaima Abou-Bakr is a professor of English and comparative literature at Cairo University (Egypt); a founding member of The Women and Memory Forum; and a member of the Musawah Knowledge Building team. She specializes in medieval Sufi poetry and comparative topics in medieval English and Arabic literature. Her scholarly interests also include women’s mysticism and female spirituality in Christianity and Islam, feminist theology, Muslim women’s history, and gender issues in Islamic discourse.

Dr. Ziba Mir-Hosseini is a legal anthropologist specializing in Islamic law, gender and development. She has a BA in sociology (1974) from Tehran University (Iran) and a PhD in social anthropology (1980) from the University of Cambridge (United Kingdom). A professional research associate at the Centre for Middle Eastern and Islamic Law, University of London (United Kingdom), she has held numerous research fellowships and has been a visiting professor at the Hauser Global Law School, New York University (USA). She is a founding member of Musawah. Ziba’s publications include Marriage on Trial: A Study of Islamic Family Law in Iran and Morocco (1993, 2002); Islam and Gender: The Religious Debate in Contemporary Iran (1999); and Control and Sexuality: The Revival of Zina Laws in Muslim Contexts (with Vanja Hamzic, 2010). Dr. Mir-Hosseini is also a co-editor of Men in Charge? Rethinking Authority in Muslim Legal Tradition (2015) and Gender and Equality in Muslim Family Law: Justice and Ethics in the Islamic Legal Tradition (with Kari Vogt, Lena Larsen, and Christian Moe, 2013). She has also codirected, with Kim Longinotto, two award-winning feature-length documentary films on Iran: Divorce Iranian Style (1998) and Runaway (2001). In 2015, she received the American Academy of Religion’s Martin E. Marty Award for the Public Understanding of Religion.