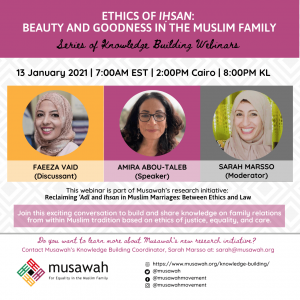 WEBINAR: Ethics of iḥsan: Beauty and Goodness in the Muslim family 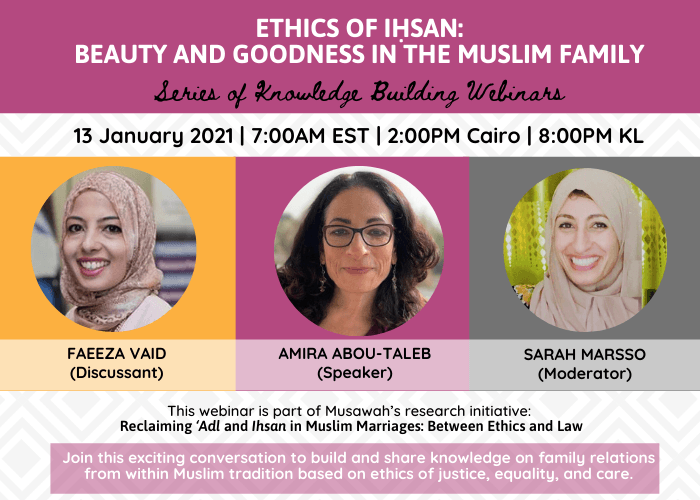 We are pleased to invite you to join us in this webinar titled “Ethics of iḥsan: Beauty and Goodness in the Muslim Family”, featuring the work of Amira Abou-Taleb (University of Helsinki) with the participation of discussant Faeeza Vaid (Muslim Women’s Network UK) and moderated by Sarah Marsso (Musawah).

In this webinar, Amira will focus on the function and meaning of iḥsan and its concepts of beauty and goodness in relation to gender, family, and community dynamics. Amira will reflect on how the Qur’anic mandate for iḥsan can play a role in revisiting hierarchical and detrimental gender norms and practices in Muslim contexts. She will open a conversation on the implications of this approach and perspective on multidimensional reform work towards equality and justice in the family.

Webinar Recording:
Ethics of iḥsan:
Beauty and Goodness in the Muslim family

Amira Abou-Taleb: Following a career as an international advertising executive, Amira went back to school to earn an MA in Islamic Studies from the American University in Cairo. Upon graduation she designed a new course titled “Beauty & Reason in the Islamic Civilization” which she introduced and taught at AUC between 2013-8. She most recently introduced this course at the University of Helsinki where she is currently working on her doctoral studies focusing on the concept of iḥsan in the Qur’anic ethical worldview. Amira is the author of the chapter “Constructing the Image of the Model Muslim Woman: Gender Discourse in Ibn Saʿd’s Kitāb al-ṭabaqāt al-kubrā” in the newly released book edited by Nevin Reda and Yasmin Amin titled Islamic Interpretive Tradition and Gender Justice : Processes of Canonization, Subversion, and Change”

Faeeza Vaid: With an academic background in Law and Religious Studies, and extensive understanding of the lived experiences of Muslim women in the UK, Faeeza has combined her knowledge, skills, confidence and passion for justice, in order to be a force of social change through research, advocacy, campaigning and policy development in the UK. Faeeza’s Masters dissertation done at the University of Warwick was entitled: ‘Notions of Scholarly Religious Knowledge Authorities in Muslim Societies and Muslim Women’s Movements as Challenges to the Current Status Quo.’ Faeeza became Executive Director of MWNUK in September 2011 and has proved herself as a standout leader with excellent operational and strategic management skills. In the 2019 Queen’s New Year’s Honours Faeeza was awarded an MBE for Services to Women’s Rights.

Sarah Marsso: Since 2015, Sarah has been coordinating the activities of Musawah’s Knowledge Building Working Group. She co-authored Musawah’s Women’s Stories, Women’s Lives: Male Authority in Muslim Contexts (2016) and Who Provides? Who Cares? Changing Dynamics in Muslim Families (2018) and has contributed to many other Musawah publications and activities. Sarah is a graduate of Sciences-Po (France) in European Studies and International Relations and holds an MA in Development and Cooperation in the Middle East & North Africa from l’Institut d’Etudes Politiques of Lyon (France). She is based in Paris, and has been involved in various workshops, activities, and events relating to feminist and anti-racist activism in France and Europe.