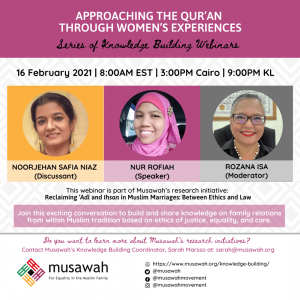 We are pleased to invite you to join us in this webinar titled “Approaching The Qur’an Through Women’s Experiences”, featuring Dr. Nur Rofiah (PTIQ/College of Quranic Science, Jakarta), with the participation of discussant Dr. Noorjehan Safia Niaz (BMMA) and moderated by Ms. Rozana Isa (Musawah/ Sisters in Islam).

How do we understand the Qur’an’s ethical framework for gender relations through empirical lenses? In what ways have women’s experiences been silenced in the conventional readings of the sacred text, and how can we reclaim these voices in contemporary engagements with the Qur’an?

In this webinar, Dr. Nur Rofiah will address these questions and introduce her methodology of reading the Qur’an through women’s experiences with a goal of achieving substantive justice for women. She will shed light on Indonesian Muslim women scholars’ innovative interpretive approaches to the Qur’an and share with us the lessons learnt from the successful marrying of the production of Islamic feminist knowledge and gender-sensitive activism in Indonesia.

Dr. Nur Rofiah is a lecturer of Methodology of Qur’anic Interpretation at the graduate and postgraduate levels at the Islamic State University Syarif Hidayatullah and at the Institute for Qur’anic Studies in Jakarta. She is also a women’s rights activist who promotes gender justice within Islam as a writer, facilitator, and resource person. She has authored books in Indonesian whose titles translate in English as Breaking the Silence: Religion Hears the Voices of Women Victims of Violence and Islam as Human Religion: Reinterpreting Qishas and Hudud. She is a board member of Alimat and Rahima, two of the three institutions that initiated and arranged the first Congress of Indonesian Women Ulama in 2017.

Discussant: Dr. Noorjehan Safia Niaz is the co-founder of Bharatiya Muslim Mahila Andolan (BMMA), a movement of Muslim women in India that has worked consistently in the areas of Muslim family law reform, education, health, security, and livelihood by encouraging and facilitating the leadership of Muslim women. Noorjehan has a PhD from Yashwantrao Chavan Maharashtra Open University.

Moderator: Ms. Rozana Isa is currently the Executive Director for Sisters in Islam, a Malaysian NGO working on women’s rights within the framework of Islam. She is also a Board member of Musawah, and has been Musawah’s Secretariat Coordinator from 2009 to 2017. She joined the Malaysian women’s rights movement in 1999 in an effort to address violence against women. This exposed her to challenges women face to have their rights recognised and exercised in a context of Islamization within a democratic nation with parallel legal systems, where gender, ethnic, and religious diversities are celebrated in society yet negated at different levels of policies and laws. Before taking up the helm of SIS, Rozana worked with a number of national, regional, and international women’s rights organizations.