Sri Lanka is currently deliberating reform of the Muslim Marriage and Divorce Act (MMDA) of 1951, the main law that governs marriage and family matters for the Muslim minority communities in the country. Muslim women’s groups have been advocating for reform of the Act over three decades. Over the past five years a younger generation of activists and community women’s groups have sought comprehensive reform to the Act and the Quazi court system to  address all areas of discrimination against women and girls.

At the request of Muslim women’s groups in the country, in March 2019, Musawah Executive Director Zainah Anwar visited Sri Lanka to meet with civil society actors and Muslim activists in support of efforts to reform the Sri Lankan MMDA.

Meeting with Muslim political and community leaders and civil society

On 23 March, Musawah was invited by Minister Rauff Hakeem, national leader of the Sri Lanka Muslim Congress (SLMC), to make a one-hour, closed-door presentation in Parliament regarding Musawah’s scholarship on Islamic legal tradition and research on Muslim family law globally that evidence the progress on reform of Muslim family laws. Zainah gave a presentation, followed by a Q & A discussion on substantive issues being discussed at the time on reforming the Sri Lankan MMDA, including raising the minimum age of marriage, women as Quazis (judges in religious courts), and the upgrading of the Quazi court system. Participants included selected Muslim members of Parliament, progressive scholars, a former head of the Board of Quazi, members of 2009 Reform Committee, and others from Muslim male-led organisations like the Muslim Lawyers Association, National Shura Council and Center for Islamic Thought. 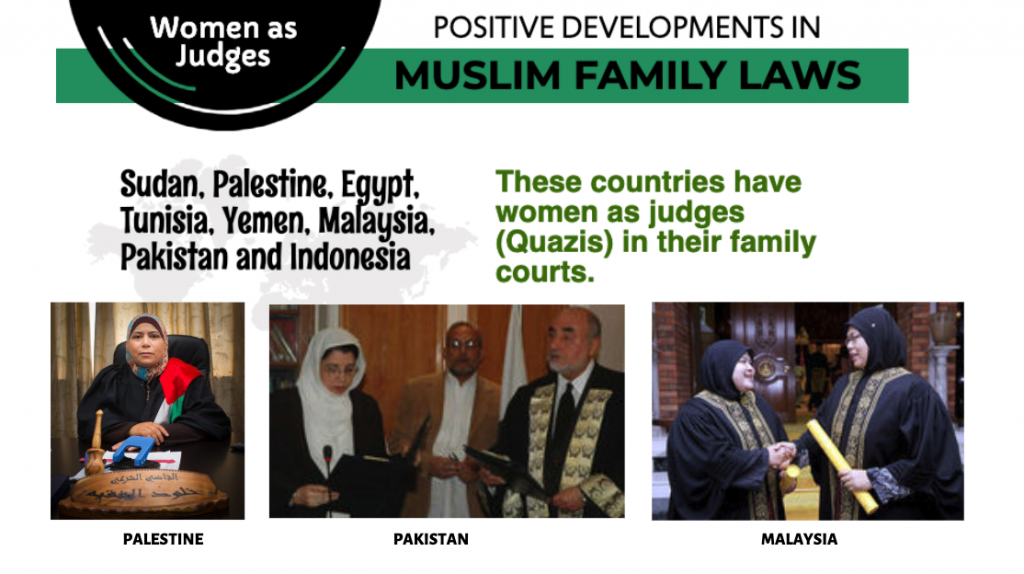 One of the main issues being debated is whether women should be allowed to serve as judges in Shari’ah or religious courts. In countries such as Malaysia, Indonesia, Pakistan and Egypt, women can and do. However, in Sri Lanka, the MMDA prohibits women from being appointed as Quazis (judges in the Quazi court) or as members in the Board of Quazis, who serve as adjudicators or marriage registrars, thus perpetuating a discriminatory law that puts those in power even further away from the everyday lives of Muslim women in their communities.

Zainah stressed that it is important for reform efforts in Sri Lanka to take into consideration the lived realities of women on the ground. She emphasised that there is enough evidence of the objectives of Shari’ah and tools within Islamic legal tradition that support reform that will bring equality and justice for Muslim women. She further stated that political will is needed to ensure that reform is meaningful and will bring an end to areas of discrimination, which will benefit the Muslim communities as a whole. Muslim leaders need to think about whether or not reform will serve the needs of the community and solve the current problems.

Documentary Film Screening of ‘The Judge’

On the morning of 24 March, Zainah and Hyshyama Hamin, Musawah’s International Advocacy Officer, presented Musawah’s research and scholarship to Muslim activists from community-based organisations working on MMDA reform, as well as selected civil society activists. The presentation was structured to approach the issue of reform in Sri Lanka first by sharing the experiences of Musawah and Sisters In Islam in Malaysia, and then by making the case for reform using Islamic jurisprudence and legal tradition that promotes equality and justice, stressing on our lived realities and changing times. The Musawah team also shared examples of how reform of family laws are happening globally and the types of provisions other countries have with regard to the issues that are being debated.

In the evening of 24 March, the Muslim Personal Law Reforms Action Group along with the Islamic Women’s Association for Research and Empowerment (IWARE), Women’s Association of Sri Lanka Malays (WASLAM), Women Action Network (WAN) and Human Elevation Organization (HEO) co-hosted a screening of the documentary film ‘The Judge,’ which follows Judge Kholoud al-Faqih, the first woman Shari’ah court judge in Palestine and the Middle East. The film was intended to show a different perspective on the issue of women judges, a topic which has faced contentious debate in Sri Lanka as activists push to reform the MMDA. A panel discussion on ‘Women as Quazi (judges) in Sri Lanka’ followed, with Zainah, community activist Juwariya Mohideen and lawyer Ermiza Tegal, moderated by Hyshyama. The documentary and panel discussion demonstrated that there are changes happening in Muslim family laws and family court systems around the world, and other contexts such as Palestine allow women to serve as judges in their Shari’ah courts. Judge Kholoud’s personal journey is inspiring not just because of her maneuvering through the Islamic legal framework that is often misused to discriminate against the women on both sides of the bench, but also because her persistence and clarity show what is possible in the search for more just reforms.

For a closer look at what was discussed, Amra Ismail wrote an article for the Daily Mirror covering the event: ‘Female Quazis allowed in Islam, but not under MMDA.‘

RESOURCES ON WOMEN AS JUDGES IN RELIGIOUS COURTS (QAZIS/KADIS or QUAZIS):

There are a few resources available for those who are interested in pushing for reforms that would allow for women qazis or judges in Shari’ah courts.