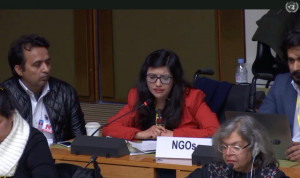 The fifth periodic review for Pakistan came up in February 2020 during the 75th CEDAW review, along with seven other countries. Following the Constructive Dialogue between the CEDAW Committee and the government of Pakistan, the CEDAW Committee released the Concluding Observations with recommendations for the country on various women’s rights issues.

The committee made concrete recommendations in relation to marriage and family matters, such as:

In the lead-up to the Constructive Dialogue, Pakistani civil society, representative of a variety of constituencies, submitted shadow reports on key issues of concern. They can be accessed here.

The minimum age of marriage for girls differs according to gender and religious affiliation. A uniform policy and legal reform are needed to protect women's rights in the family

Musawah submitted a thematic report on Article 16 and Muslim family law for Pakistan. The thematic report examines Pakistani laws and practices that enforce de jure and de facto discrimination against women in the areas of: child marriage, forced marriage, polygamy and unequal provisions for divorce under the Muslim family laws.  Musawah’s thematic report also provided justifications for the reform of discriminatory family laws. The report included positive developments from other Muslim countries around the world that demonstrate that these laws are based on human interpreation (fiqh) and thus are not divine or unchangeable, and so can be reformed to address the concerns and realities of people living in Pakistan today.

Musawah also was present in Geneva to support national-level advocates and to advocate for family law-related issues with the Committee. During the Constructive Dialogue, Pakistani civil society submitted a joint oral statement and raised child and forced marriage as a priority issue in the country. Pakistani activists expressed concern to the CEDAW Committee about the Child Marriage Restraint Bill being rejected in the Pakistan National Assembly in 2019 due to strong opposition from conservative groups who argued that, in Islam, minor girls can be given in marriage.

For a quick recap of the session in Geneva, check out our Twitter moment.

From the Constructive Dialogue between the CEDAW Committee and the Pakistani government and from the resulting Concluding Observations, there is clear recognition at the national and international levels that Pakistan’s laws contain multiple discriminatory provisions against women and girls. Many of these laws stem from archaic practices that no longer reflect the lived realities of Pakistani women and girls. It is the responsibility of the government to ensure that discrimination in marriage and family matters is addressed with urgency. The recommendations by the CEDAW Committee, based in part on Pakistani civil society’s inputs on lived realities on the ground, are a guide for such priority reforms.

It is time the state stops hiding behind religion to justify discriminations. Change is possible and necessary.

Following Pakistan’s review before the CEDAW Committee, Fauzia Viqar, the CEO of Rah-Center for Management and Development and an internationally recognised women’s rights activist from Pakistan, wrote two editorials that home in on the lived realities of Pakistani women with regard to right to maintenance after divorce and on the issue of child marriage.

“Islam does not forbid financial protection for women in marriage and upon divorce. In fact, it contains provision for support to women under the doctrine of mata’a or mata’tu’talaq, which refers to an award of maintenance to the divorced wife for life or, till she remarries, piecemeal or in a one-time transaction. Muslim countries like Turkey and Iran have detailed legislation for recording a woman’s contribution to family business and property acquired during marriage. In case of divorce, this record helps assign the respective share to the man and woman. Similarly, Tunisian and Malaysian family laws provide for a woman’s right to ownership of property acquired during their marriage. In 1956, the Commission on Muslim Marriage and Family Laws in Pakistan took a very sympathetic view of mata’a, observing that “a large number of middle-aged women who are being divorced without rhyme or reason should not be thrown on the street without any means of sustaining themselves and their children”. Unfortunately, powerful male members of the same commission opposed this burden on men, declaring that it would be against morality to provide for continued support of a now “na-mahram” woman from her ex-husband. These members also termed it unfair to the new wife who would be denied her rightful share in the husband’s earnings. The Law and Justice Commission of Pakistan has twice proposed a draft law for mandatory maintenance beyond the period of iddat and the Council of Islamic Ideology recommended enactment of a law on mata’a in 2008, but the Parliament has not taken up the matter till now. … Pakistan needs to enact laws for maintenance and the right to matrimonial property and take measures to record the husband’s and wife’s assets and sources of earning accurately. This will help reduce women’s financial vulnerability and the practice of arbitrary divorces based often on whims of the husband.”

“Marriage is considered to be a mithaq, a solemn covenant or agreement between husband and wife, and enjoined by The Quran [4:21]. Since no agreement can be reached between parties unless they are able to give free consent, how can minors (those under the age of 18) have the capacity to enter a contract. Unfortunately, despite national laws and international commitments, child/forced marriage remains a real threat for many in Pakistan. According to the Pakistan Demographic and Household Survey (PDHS 2017-18), 8 percent of women age 15-19 are pregnant with the first child or are already mothers. Accurate figures for child marriages are not available due to the practice of verbal marriage solemnization, non-registration and misrepresentation of age at marriage. … Welcome measures of the governments and of the civil society organizations since the past decade to invest in girl’s education and to raise awareness of the harmful consequences of early marriages have led to reduction in the incidence of marriages below the ages of 16. When poverty-stricken parents receive a generous stipend for their girl’s education, their incentive to marry them off is significantly reduced.”